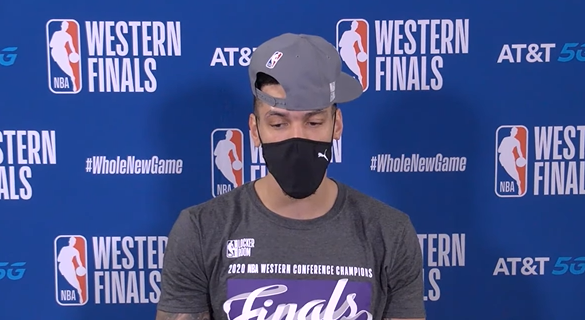 Tiger Fight, September 27. In the fifth game of the Western Conference Finals that ended today, the Lakers defeated the Nuggets 117-107, and the series scored 4-1 to advance to the finals. After the game, Lakers player Danny Green accepted a media interview.

Speaking of the many setbacks in the past few months and finally reaching the finals, Green said: "The experience of the past few months is crazy. We have overcome many obstacles this year. This team is full of resilience. At the same time, I also want to ask Denver. Pay tribute to the Nuggets. They also overcome many obstacles. They are tough and they never give up. There are several points in time, we feel that we have taken control of this round of the series, you must be in awe of them, to Jamal- Murray and Nikola Jokic pay tribute to the performance of all opponents, Jeremy Grant, Tori Craig, and obviously, there are also talented young people Michael Porter Jr., Michael -Coach Malone did an incredible job leading the team to the Western Conference Finals. You will see them often on such a stage in the future. I want to pay tribute to them and congratulate them on an incredible season. They have been fighting. Our work is not yet complete. We will be satisfied a little bit, but not fully satisfied. We know what our goal is."